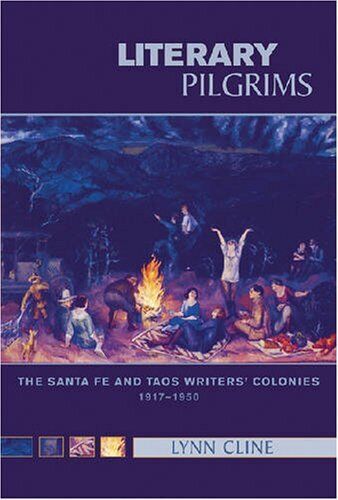 Fleeing a post–World War I environment marred by materialism, mechanization, and corporate corruption, American writers flocked to the inspirational landscapes of northern New Mexico. These writers discovered new muses in the Southwest. Newcomers were buoyed by the ancient traditions of the Pueblo, Navajo, and Hopi cultures and by the kinship of deeply rooted Hispanic communities. Of New Mexico, Pulitzer Prizewinning author Paul Horgan wrote, "The earth seems near to the heavens." Indeed, New Mexico was the place of poetry.

Thanks to a thriving art market, newcomers to Santa Fe and Taos were (and still are) famous for the legacy of their art colonies. However, the history of the literary scene has not received the attention shown the artists. Students of literature might recognize names like D. H. Lawrence, Mabel Dodge Luhan, and Mary Austin, but what about Haniel Long or Raymond Otis?

Literary Pilgrims is no longer in print, but you may be be able to find copies on ebay and the library.  Lynn Cline of Santa Fe is also the author of "The Maverick Cookbook", and "Romantic Days and Nights in Santa Fe". She has been an editor, staff writer and contributing author for Local Flavor, Santa Fe New Mexican, Pasatiempo, the Santa Fean magazine, Santa Fe Tourism (city and county). Lynn currently freelance for the New Mexico Magazine and numerous other publications.